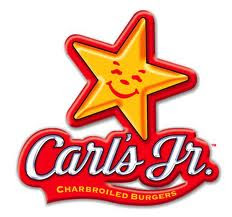 When describing the Memphis BBQ Burger to Matt: pulled pork, crispy onion strings, cheese and a patty, he asked "is that real?". Yes it is real and it looks as if you can get a double patty version if you are inclined! The single patty version clocks in at 1030 calories, 55 grams of fat, 135 mg of cholesterol - kinda scary right?

So for my last Fast Food Friday for MOFO I had to veganize it! I started off with a seeded whole wheat bun, patty of choice: Gardein fresh burger, cheeze, Just Pure Foods crispy onion rings crushed up, pulled jackfruit tossed in a spicy BBQ sauce and more BBQ sauce added! 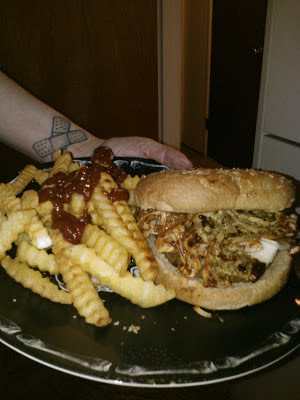 Verdict: winner! Seriously good, messy and with a side of fries it was a fast food fake-out to the max! Sorry for the less than stellar close up, we wanted to dig in and I wanted to eat and watch American Horror Story! Just a few notes: I used Follow Your Heart's Monterey Jack instead of cheddar due to it being on hand. I also used way less onion strips because Matt hates onion - however these crunchy gems were a hit, they were spicy and added a kick!

Once out of MOFO-mode I plan on trying more fast-food fake-outs! It has been fun, things that look/sound gross are actually winners!
Posted by Kendy P at 9:32 AM