[Vegan MOFO Day 11] Weekend Round Up: Busy In 2 Cities

Friday night Matt and I just chilled at home, after shopping for a bit. Matt updated his PS3, I read and we went to bed early...but with our porch light being repaired, a meow-y Mar and the PS3 needing attention my sleep was not all that great.

Saturday we got up early - for a weekend, but decided to be lazy in bed. So our plans kept changing. We decided to go up to Oakland and grab a light lunch-snack since we were having an early dinner. 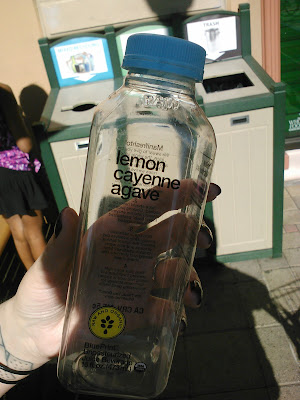 Once in Oakland we headed to Whole Foods, we grabbed vegan taquitos from the hot case and a Blue Print Juice. Normally I would not spend $8 on one bottle of juice but I was curious about all the hype. I picked out the lemon cayenne agave - since I like sweet and hot. It was not really sweet but it had a kick. Would I spend $8 on it again? Most likely not! I will just get some lemonade and add a pinch of cayenne!
We scored vegan samples of some yummy food demos that day. Some rad products that I will blog about later this week!

We tried to do some shopping and it did not really work out. So we headed to Berkeley along the ocean route to meet up with GiGi  from Veganville and her husband at Nature's Express for dinner. We were on a tight sceduale because we had to drive back to Emeryville for Matt's film night...

GiGi interviewed me for her blog - she will post it later for MOFO and made us sinfully rich cake in jars - well, that is what I called them! Yummy chocolate parfaits with light airy coconut cream...I was so happy meeting her and her husband! Super nice people who made my night right!

So we love Nature's Express. The food is awesome, the service is fast and I like everything I have tried! 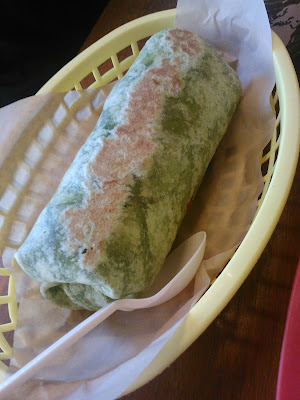 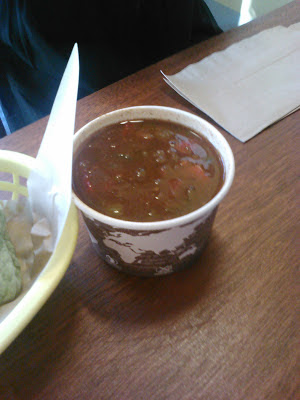 I ate it with a side of chili. 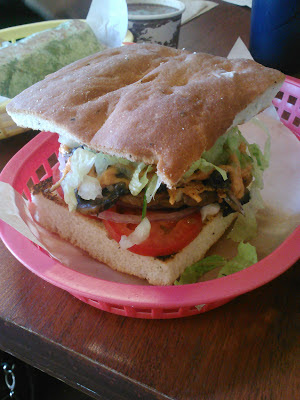 Matt got busy with a chik-un melt and fries!

We headed back to Emeryville and watched movies, including Matt's...Hung out and then decided to head back over to Whole Foods to get some perishables before going home. We found Beyond Meat in the hot case - in the form of a green chile sauce base, so good, Matt and I wished we got more. We saw a few people go for it while we were packing our box up - it is popular and I hope to see it out on the market full force!
What is rad about WF Oakland is they have vegan pizza by the slice...When you are going close to closing and the slices are getting small - you might get lucky and get a free slice like we did! Score! We had food in the parking lot, went across the street to 7-11 and got coffee to take on the road and headed home.

Fun times! We will be back in the East Bay soon enough! We love it there!!!