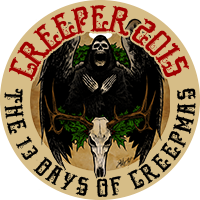 The Spooky Vegan has inspired me to take a stab at the holiday season with Creepmas! Starting tomorrow I will unleash 13 days of creepy holiday fears and cheers. Admittedly my stuff will probably be more on the gloomy and cute side but I might have the mister bring some of his style in a special post here. All Creepmas posts will be tagged so allowing me to blog about other stuff like cats, food and so forth will not confuse your minds - the holiday season is stressful enough right?
Posted by Kendy P at 12:25 PM 1 comment: 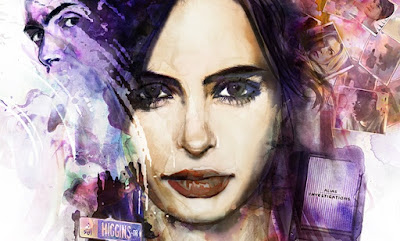 So I was looking for something to watch last week via Netflix when Jessica  Jones pops up. I love Krysten Ritter (especially in Don't Trust The B in Apt 23) so I was curious. I am not a comic book reader - though I do enjoy comic book shops and a few independent comics so I was not sure what to expect.

I have to say this show is great. I am at the mid point in season 1 and without comic knowledge I can easily follow along. What draws me to the show and why I am taking time to blog about it is Kilgrave. I have read a few postings about the show and people's views on consent, I get that and think people have went into great detail about it so I do not feel the need to do so here. I want to talk about Kilgrave and mental illness. 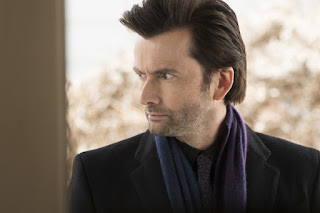 First Kilgrave scares me more than any horror movie monster ever could. Here is an average (I am sure some would say handsome) dude that has the ability to get into your mind and make you do whatever he wants. That is scary enough but what makes my skin crawl when Killgrave is on screen manipulating people to do as he wants is how close it hits to home.
For me Kilgrave is OCD. Kilgrave is every intrusive thought that pops into my mind against my will. Every thought that makes me question my sanity, shakes my core, that gives me fear. I do things because something tells me things will go wrong if not, so I do them. My mind clears and I am left with shame. Kilgrave mimics what I believe a lot of of us with mental illness feel. Day to day we face our own personal Kilgrave. We try to hide, we pretend it is not there but it is there waiting.

We see Jessica fight PTSD brought on by Kilgrave in two main ways, stuff she learned in therapy and drinking. Again I think a lot of us can relate. We cope with what is in our heads in healthy and sometimes unhealthy ways. We see someone fight her demons in a relistic way that film often glosses over in this series. I appreciate that!

Even if you are not into comics or super heroes I think the show is a must watch. Strong female lead and lots of room for thought! 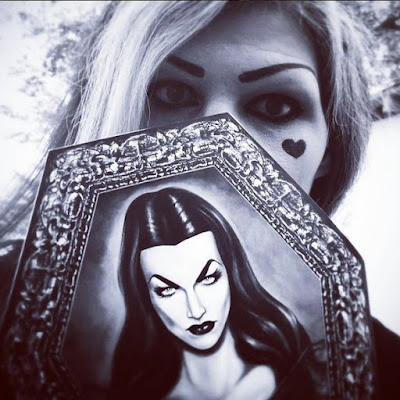 I have a photo in the spooky girl centerfold section in the latest Goir Noir. The magazine is coffin shaped and has some cool art by Quyen Dinh (which is an artist I like and have a print from on my wall!). 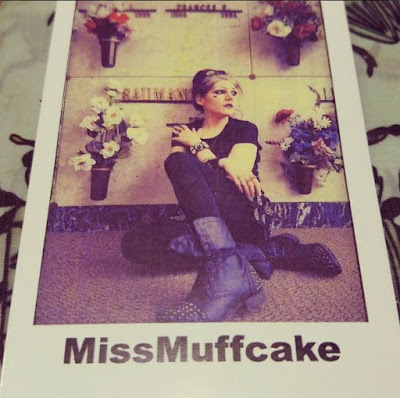 I even have my own zinester trading card out in circulation.

I also have a short piece in Mental Health Is Ugly put out by Queer Anxiety Babiez Distro.

So I feel like a star. Getting mail like this with my name/photo in it is awesome! Support these people and their projects! Get involved in independent press and you too can see your name and face all over the place!
Posted by Kendy P at 11:54 AM 4 comments:

You know how much I love these little (in Morty's case big) fur balls. They are constantly by my side - in fact Mady is on my lap now as I type this. 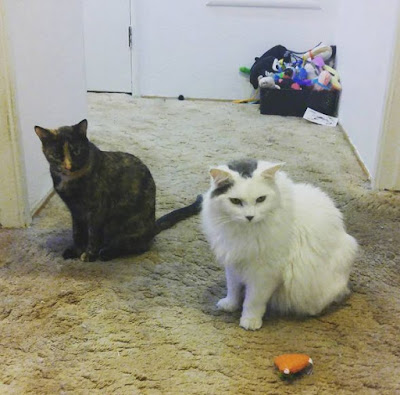 After Halloween sales let us score some cute toys that they are not impressed with. You might be wondering what the basket is in the background - it is their hallway toy stash, the ones they play with in the middle of the night. They have one in the living room too. The hard life right? 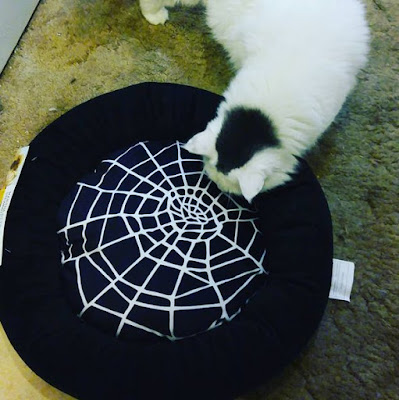 We even picked up a bed for them marked down by $20! It took about a week for one of them to use it but Mortis has claimed it as his nap spot! 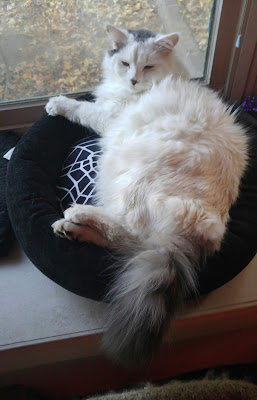 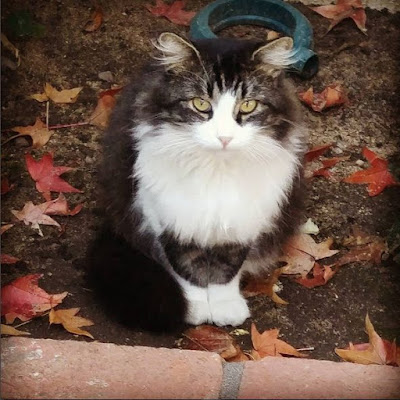 This is our feral friend Mama. She has been hanging out at our house for 3 or 4 years now. She will trot in doors at times, eat the leftovers (which are rare with Mortis around) and leave. Each morning she waits for her big bowl of crunchies. She has been flirting with Mortis lately and he is confused! Ick - girl germs!

I told myself that I will post more makeup reviews but then slacked off a few in. I do a lot of photos of myself in cemeteries and I always worry that people think I have a big ego or that I am a show - both are so not true. I also get nervous if I send the wrong impression when I post that I bought a lipstick that costs $20. Yes all these thoughts race in my mind. I am trying to say shut up to the voices because I know that I do not have a big ego, that I just like to have fun and $20 once in awhile on a lipstick is a fun treat.

With all that mental babble out of the way I present my current favorite beauty things. All vegan - cruelty free and approved by me! 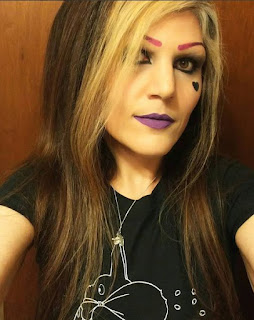 I'm Royalty by Jeffery Star Cosmetics. This bright purple lipstick is awesome. People stop me to ask what color it is! Not only is the color awesome the formula is as well. It goes on nicely, stays put and does not have a drying effect. I paired it with two tone pink to purple brows. 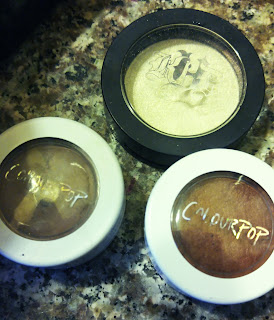 Kat Von D Metal Crush shadow in Thunderstruck. I like these color for the inner corner of my eyes and middle of my lid to add brightness with all the black liner I pile on. It is a pearly white-gold color that blends nicely and has a fine glitter shimmer, nothing funky-chunky that messes with the eyes.

ColourPop has two shadows I use almost every day. Bill my go to muted nude - it says it is a plum but to me it is very flesh toned. I have dark lids and this gives me a clean base to add just a bit of crease color and be good to go. Bandit is my other go to. It is a rich warm brown that reminds me of fall and pairs good with purple lips! I use it in my crease with a fluffy brush.

Stealing Is Not Cool

Vegan Varg informed me that my zine Cemetery Gates is reviewed in the current issue of Slingshot. I was excited and nervous - because truth be told the zine community has not been kind to CG in the past. I found the review online and later in the week received a print issue of the zine in the mail. 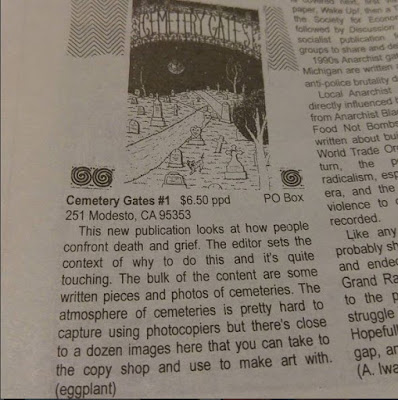 If you cannot read the review in the photo::
Cemetery Gates #1  $6.50 ppd (???) PO Box 251 Modesto, CA 95353
This new publication looks at how people confront death and grief. The editor sets the context of why to do this and its quite touching. The bulk of the content are some written pieces and photos of cemeteries. The atmosphere of cemeteries is pretty hard to capture using photocopiers but there’s close to a dozen images here that you can take to the copy shop and use to make art with. (eggplant)

After reading the review I sat in my chair and had to pick my jaw up off the floor. I was angry, amused and disappointed. Basically eggplant says to steal my photos, my zine, my hard work and use them for whatever. Seriously? I know in the punk community/anarcho community stealing is seen as a F-you to capitalism - as long as you steal from the big guys. If you walk into any punk-radical store there is at least 5 signs saying not to steal from them - they are not the man. I always find that way of thinking stupid.When did stealing from small companies, zines, small business become cool?
I wrote to eggplant and basically he told me that I should be lucky to have been reviewed. Wow really? Also that by releasing my zine I put it out there for anyone to do as they wish with it. Seriously? When did zines become so cut & paste, like things you toss? I know among my zine friends we save our zines, organize them and hold onto them. They are not a big time publication to cut up and use for collage.

I want to put it out there that when I make a zine I do not expect to make much. When you buy a zine from me you are paying for the price of the copies I made, postage and future zine costs. If I have anything extra after that - well I have two cats who like to eat and I like a good beer now and then. The point is I make little $ off of my work. I spend months on a issue from photos, to setting up interviews and everything in between.
My zines are not art project material. I encourage people to share zines - mine included but above all turn friends onto zines and let them buy copies. Making zines is a passion that zine makers have. A passion that costs money and time. Zines are more than paper and staples. Support zine makers! Buy zines, encourage your favorite zine makers to make more zines.

I will be releasing Cemetery Gates 3 - in the next few weeks. Sneek-peek tid bit: there will be a color cover this time around! I have been getting positive feedback from the horror community and think I will stick with sending press samples out to them. Also I will put bold 'these are my photos' type wording in upcoming issues more prominently. Maybe a banner that reads: do not steal is in order? 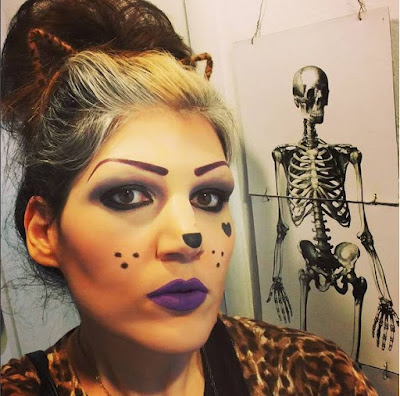 I tossed together a cat costume with stuff I had in my closet. Everyone needs a pair of cat ears in their closet! 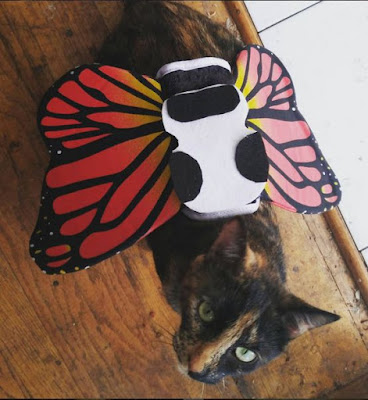 Mady was a Death's Head Moth (as seen on Silence of the Lambs). She did not like the costume much so getting a good picture was rather hard but I tried! Matt gave me the idea when we spotted wings at pet store but they were like $25. I looked online - found a cheap pair and made a skull out of craft felt and attached it to the wings using double sided tape. This way come spring Mady can be a butterfly or something. 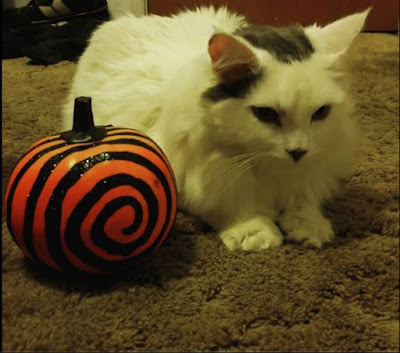 Mortis had a costume but it did not fit him well. So Matt snapped this photo of Mortis with a pumpkin.

Besides being catty Matt and I munched on vegan pizza and ice cream and spent time watching spooky shows and movies. I had a few kids at the door I gave candy too but each time there was a knock the cats got scared so I turned off the lights. Low key but nice - a winner!
Posted by Kendy P at 9:37 AM 3 comments: