I am slowly feeling better from whatever I caught last week. I enjoyed a roller derby game over the weekend, lots of sleep and a tropical shower! My mood is still blah and I get drained pretty easily but all in all I am getting better!

I received my body care order from The Sudsatorium last week and even with a stuffed up nose I smelled the delights wrapped up in the package.  I found the company while searching for new vegan beauty booty online. At first the packaging/display reminded me of Lush but then I was caught up in the unique scents and ingredients they were using.

Enter Monkey Business Soap, a delightful banana packed bar of pure delight. It has actual banana pieces floating in the bar. It smells fruity and creamy thanks to the real bananas and soy yogurt. Not tons of lather but tons of scent and it leaves me feeling clean. The bar actually scents up the whole bathroom and I cannot stop smelling it.

There are many delights I want to try from The Sudsatorium, where do I start? From body care and lip products to shampoo! So much to choose from. All vegan and handmade to boot! Go check them out for yourself! Get clean and smell nice!

Hey guys, I have been awfully sick since Monday night. I woke up with a sore throat and it just got worse from there. This week besides feeling all ouchy I made a bunch of comfort food. Recipes need tweaking when I can actually taste again but feel free to use your imagination for inspiration! 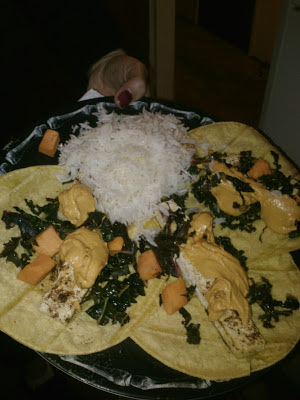 You're A Jerk Tacos: Tofu dry rubbed with a hand blended jerk seasoning, baked, topped with: spicy sauteed kale, carrot and sweet potatoes a thick queso like adaption of Isa's Red Hot Tahini. I served it with lime rice on the side! 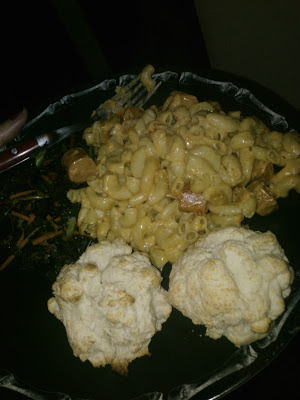 Mac & Cheeze Veggie Dog Casserole: I made a tangy cheeze sauce with Daiya, mustard, nutritional yeast and spices added the macaroni and a few cut up veggie dogs to the mix. This went into a parchement lined baking pan, topped with hot sauce and bread crumbs, baked and served with butter'milk'  drop biscuits and sassy spiced kale and carrot saute! 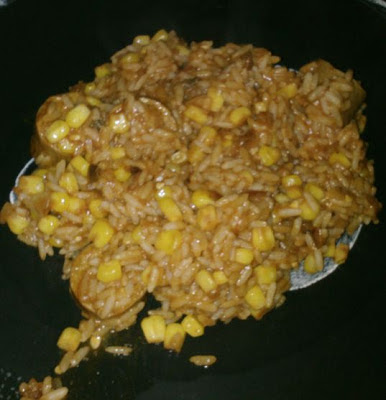 Back to bed! Seriously....Sleep is my friend lately!
Posted by Kendy P at 5:17 PM No comments: 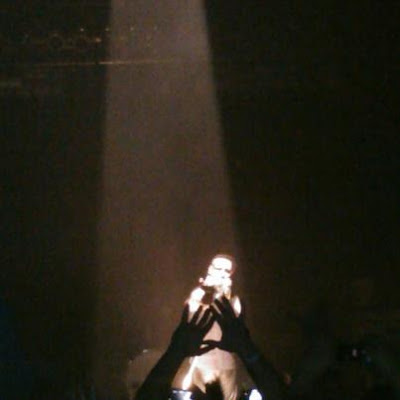 Last Friday as a post Valentine's - Valentine's day Matt took me to see Marilyn Manson! In 96-97 when I was a senior in high school I discovered Marilyn Manson, not as a way to shock my parents but as a way to cope with a bunch of crap going on. Instead of turning to drugs I turned to black clothing. Hot Topic was really new at this point, and if you are in your 30s you will remember Hot Topic being different than what it is now. Everything was black, a lot of Lip Service and goth brands...no cute, colorful rainbow pony things in site! I could not afford anything in HT, the one day I could thanks to a bit of Christmas cash I walked up to the register with a skull sweater feeling so good, only discover someone pick pocketed my coin purse and my money was gone. I went the hand-me-down route, my mom found stuff at yard sales, I had a few band shirts...I even wore some of my favorite stuff to meet MM in San Francisco at his book party. I was so nervous I remember throwing up that morning. My autographed book and my clothing was burned in a fire a few months later due to an electrical problem or as we think someone setting our house on fire.

MM's show on Friday was a great show. Full of costume and set stages. Matt said he would make a great Joker...The only complaint is the crowed. People came to the show looking for a fight, so wound up on drugs and still getting high in the crowed....I think if you can't enjoy a show unless you are high - maybe pick something else to do that you will enjoy. I had a glass of wine before the show and was set...Matt had a beer...We did not need to get wasted to enjoy ourselves. At one point a giant of a man who was 6"8" and about 300 pounds barreled through the crowed with some other giant dudes to mosh with kids...The crowed got would up, people were slammed into me and someone broke my toe...I had sturdy boots on too. A few minutes later some chick fainted at our feet. People were smashing into me and I was concerned about the pregnant chick behind me...There was no security in the crowed, no crowed control. 2 people fainted, parents brought their kids who ended up crying and wanting to leave...People did you loose your brain???

Shows are supposed to be fun. The show was fun! The crowed just sucked. I hope the promoters take word and fix these problems or I will avoid shows from them in the future. I have never been to a concert that did not have some control...I do not go to a show wanting to get hurt...I think people do go to shows looking for a fight. They should not be there...Security should be in place to promote a safe environment for everyone.

Cat fact: Many of you know Mar is named after Marilyn Manson. I use Mar online and in front of strangers because trying to explain why my 19 pound male cat is named Marilyn goes over people's heads!
Posted by Kendy P at 1:26 PM 2 comments:

I made this simple chili last night. Like everything I try to do, I kept it around $10 and under 30 minutes.  Matt said it was to spicy - I thought it was just right. Mar was happy because I baked a few sweet potato pieces for him when I made the Sriracha drop biscuits (Bisquick mix with rice milk and Sriracha swirled on top)...Yes my cat goes crazy for sweet potatoes! 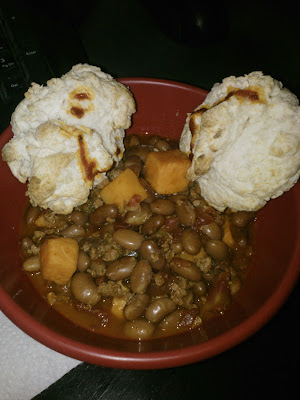 In a large stock pot heat up a splash of olive oil on medium. Add the Soyrizo, breaking it apart. Then add the sweet potatoes, let them cook down and blend together for about 5 minutes. Add your beans, Rotel, spice mix and water. Give it a stir and reduce the heat to a medium low and let it simmer for 25 to 30 minutes. To see if it is done poke a sweet potato chunk and make sure it is fork tender. Serve how you like it...I just went with simple biscuits because I was in the mood for them!

This was taken in Oakland over the weekend. It was dark and Matt pulled over to park in front of this and for a second there it looked like a person peeking out. I think it was at an art gallery... 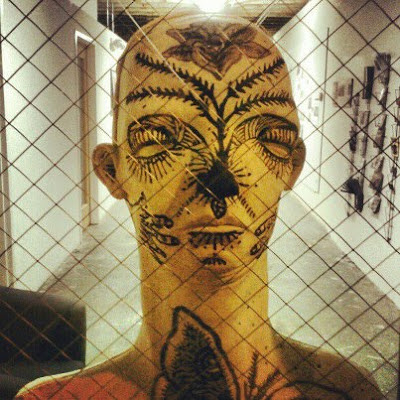 I was hungry for a stir fry the other night and since Matt was not feeling well (due to dehydration) I thought a veggie packed stir fry was in order.

I used Gardein mandarin crispy chick'n (one of the few products in the line I am not allergic to) and a bag of frozen stir fry veggies. The Gardein was $3.99 at Target, which it is usually cheaper, but still beats out the grocery store by about $2. The stir fry veggies were less than $2 a bag. I like buying frozen, because I get a nice mix and the price is cheaper than buying a bunch of produce that the store may not even have. Since the sauce packet the chick'n comes with is not substantial enough I whipped up some more sauce with Braggs, rice vinegar, Sriracha and a fresh squeezed orange. I plated it on organic rice with some toasted sesame seeds (I kinda went crazy with them!) and a easy meal was born. About $7 for two beats take out prices any day!

White People Tacos - what the heck!? So last night after the gym I decided to make tacos. I had chickpeas at home, taco shells, guacamole and salsa...I had to stop by the store to pick up some produce and ran into a bunch of pretty organic kale while buying some lemons (I need to ask my neighbor for more - but she has been so generous I feel bad/greedy). I picked up some lacinato kale and headed home.

I sauteed kale, 1 can of drained and rinsed chickpeas with a bit of olive oil. I squeezed the juice of one super juicy lemon on top, added a big pinch of Mexican spice blend, a pinch of onion powder and a squirt of Sriracha. After tossing,  I let it cook down for about 10 minutes. I stuffed each crispy taco shell with the kale-chickpea mix, guacamole and salsa. Served along with red rice it was totally good.
What makes it White People Tacos? Well, when I asked Matt what he thought he said "they were good, something white people would really like". Matt was not trying to be insulting, he really liked them (I did too!). It was just a departure from my 'trying to be a taco truck' style of cooking! This is a gluten free taco - for those that usually see my tacos loaded with seitan and wheat tortillas.  Everything was cheap/on sale and another good meal for two under or around $10.

I am not a romantic person. I am not a fan of romantic movies or books...I do like hearts though, jewelry that is fun, vegan candy. I like the good ol' V-day without all that mush. So if you are like me and want some Valentine's loot check it out:

While out shopping I picked up a cute spiked gold-tone necklace. I really like it (here I am with it on!) and bought another one for one lucky winner. This is a simple necklace that can be worn alone or with multiple necklaces which is going to be big in Spring... 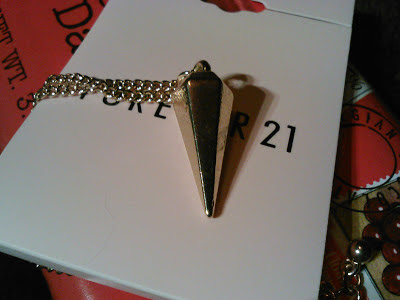 Can't leave out the candy. I went with something spicy and sweet! A dark chocolate cherry spice Chocolove bar! 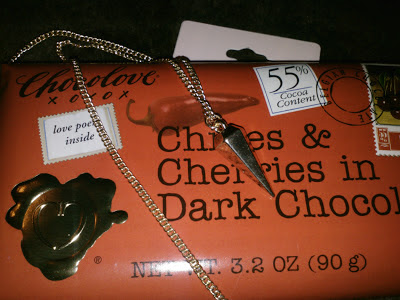 On top of this I am going old school classroom style and sending you a card! All you need to do is comment below with the answer to this: Who or what do you love? No need to be romantic - you can simply state you love the fist downward dog pose of the morning! I will pick one winner on February 8th. Please leave a way to contact you. The contest is open to everyone! Good luck!