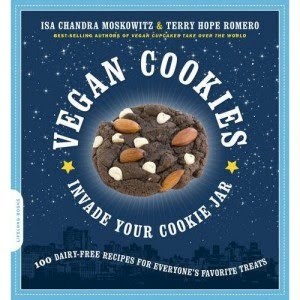 For your chance to win this awesome book please answer this question: What is your favorite cookie? Contest is open to everyone, one winner will be picked and I will ship out your book after contacting you for your details. Contest ends August 15, 2010. Good luck!
Posted by Kendy P at 10:45 AM 14 comments:

These last few weeks I have been into making kanzashi flowers. At first it looked intimidating but after looking at a few tutorials and cutting out fabric I was on a roll. I found some really awesome vintage buttons that added extra sparkle! 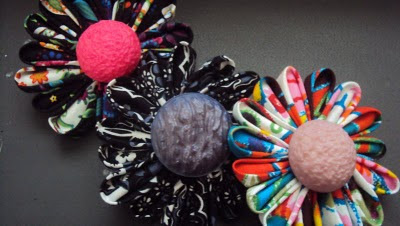 This project is great for using up scraps of fabric and the center can be made from buttons to bottle caps, making it really green! Turn them into hair clips, brooches, or whatever, they are versatile! 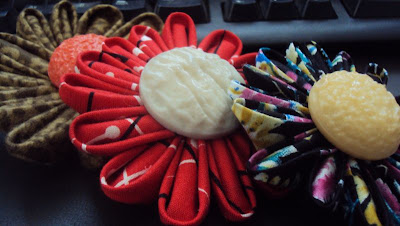 I have more petals that need to be folded!
Posted by Kendy P at 2:33 PM 4 comments:

Hats Off To My Boyfriend!

This Saturday we will be in Sacramento - no not for home goods at Ikea or to hang out on the grid (however we are eating at Sugar Plum again!) but because my boyfriend's music video is being screened! My boyfriend Matt's video for Gabber Nullification Project's song "Sunday Sunday" will be screened at Sacramento's Film and Music Festival. 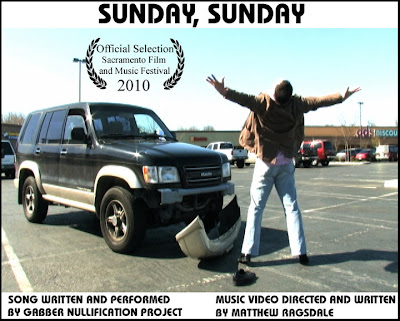 Congratulations Matthew. Mar and I love you and appreciate your talent!

If you want to check out the video please go watch it on his YouTube channel.
Posted by Kendy P at 1:26 PM No comments:

Setting Up For Craft Shows

I have been doing craft shows for a few years now. I usually stick to a card sized table for smaller events and go with something bigger for larger shows. I like using my card table the best because of the small space that forces me to have a clean layout - I am the type of person who can never have to many items sitting around. 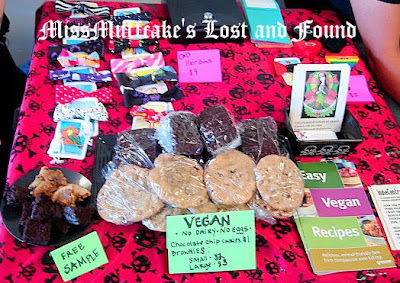 I try to get my products situated the night before. I group items together and use drawstring bags to hold them in their groups. My business cards and fliers go in a box and if they are too big I paperclip them together. My tablecloth goes on top for extra protection. I use vintage suitcases to haul my stuff to events and then hide them under the table at the event. If I am doing baked goods I place everything in food storage boxes and stack them in the fridge until they are ready to go.
The day of the event I pack all my goods in neat stacks in the car. My boyfriend loads the trunk with our table and chairs. After leaving things behind before I have learned to double check before leaving. I also make a run to the bank for change - super important!

Always get to a show early, especially if tables are not assigned to a certain location. This can mean having a great spot or being stuck in the corner. Once at the show check in and then go get your stuff. If you can bring a friend to help with getting things ready, my boyfriend always helps and vends his stuff - I am lucky! Bring extra such as markers, tape (to hold down signs - if you are outdoors!)and a note book so you can take down any notes like low inventory, and you can always doodle in it if it gets slow!

I think having a routine is important and the longer you do shows the better you get at setting up. Also having a set up plan means less stress and less stress is always good!

Thank you amea - oddly romantic for the picture of my set up!
Posted by Kendy P at 2:16 PM No comments:

I turned 31 on June 28th. I had a amazing 3 day birthday that involved coffee-walnut cupcakes and friends, San Francisco fun and good eats , a concert in Sacramento a more awesome food.

I decided to make two different cupcakes for my birthday. The one that had the most positive response was the coffee-walnut cupcakes with coffee butter cream frosting. This cupcake is super dense and rich and has loads of coffee flavor. The recipe is something I came up with after veganizing and reconstructing a few recipes. If you do not like StarBucks feel free to use a different brand of instant strong coffee. 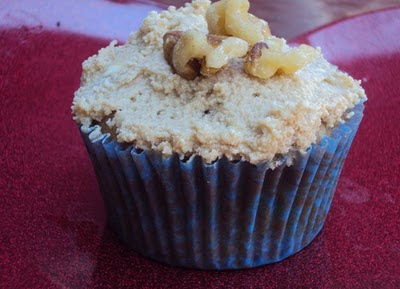 Beat the Earth Balance and sugar together until creamy and then slowly add the Egg Replacer mixture. Sift in the flour and baking powder and then mix in. Fold in the walnuts (checking for big chunks, discard those). Divide the mixture between the cupcake liners evenly. Bake for 20-22 minutes until a toothpick comes out clean.

Warm the soy milk in a pan (do not boil) add coffee and stir until dissolved. Let cool in a medium sized bowl till warm - not hot. Beat in the Earth Balance and frosting till creamy. Frost each cupcake and decorate with a walnut half.

For my birthday we usually take a mini day trip, this year I really wanted to go to Japan Town in San Francisco with a few stops. We got off BART and went over to Westfield Mall to have lunch at Loving Hut. We both ordered combo plates. The food was good, I even got a mock beef dish and it was not to ‘beefy’ which is sometimes the case when using mock meats. 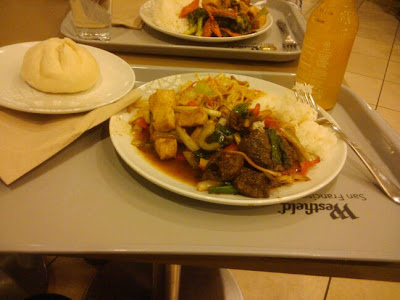 Once in Japan Town I went crazy with all of the cute toys in the mall. We had a blast taking photos and decorating them at Pika Pika. I walked out with lots of super cute stationery from Kinokuniya. I could spend all day and all my money in this mini mall. We went across the street to the New People store/mall and I fell in love with some of the goth lolita stuff on the upper level. I really liked Black Peace Now’s stuff! 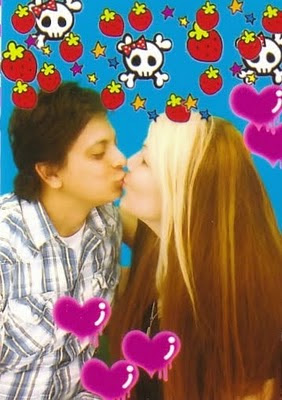 We headed down Filmore and had soy yogurt at Fraiche Yogurt with lil pillows of mochi settled on the side. Then we walked down hill (later up hill - my poor feet!) To eat vegan Chicago deep dish pizza with loads of Dayia at Patxis Chicago Pizza. I was never a huge fan of ‘commercial’ pizza since I grew up with hand made pizza from a Sicilian grandma, then vegan options are usually not tasty. Patxis just rocked the taste buds that night and we were both amazed at how good it was. 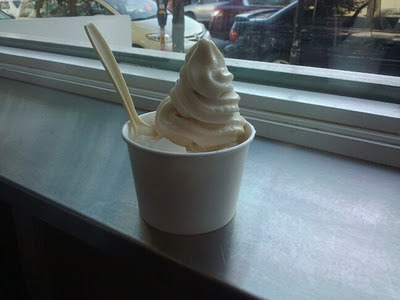 The next day in Sacramento we started off eating at the all you can eat vegan buffet at Queen Sheba . I always load up on enjeera and lentils! 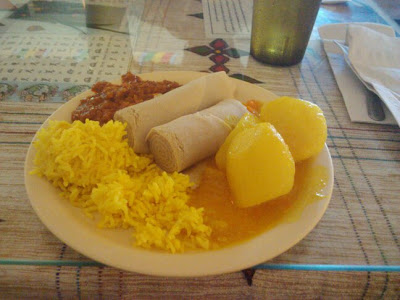 I just really wanted to try Sugar Plum Vegan after seeing they opened a store front. I had tried a gluten free - vegan brownie at a craft show one year and it was yummy. The owner was super nice and we both got our order fast. I got the midtown club and my boyfriend got the tempeh reuben panini - they were both damn tasty and we are not even sandwich people. We stocked up on sweets for after the concert (we saw Dum Dum Girls perform at Blue Lamp - good show, clean venue!), the owner even through in a large cowboy cookie! The best thing we had (on our way home!) Was the peanut butter creme filled giant cookie - tasty!
Can I just applaud Sugar Plum Vegan for a bit...Living in the valley we don’t have vegan food on every corner. People from bigger cities thinks that we are often lame and write shit about us. Sugar Plum Vegan gives me hope, they are offering monthly workshops and kick ass food without the attitude. I look up to Sugar Plum Vegan - they started off how I am starting off with my own vegan bakery and it gives me lots of hope. 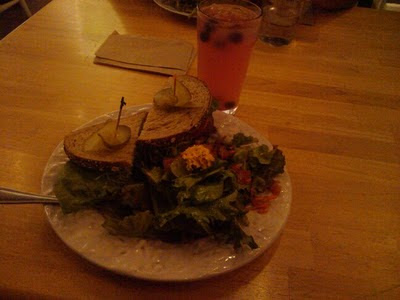 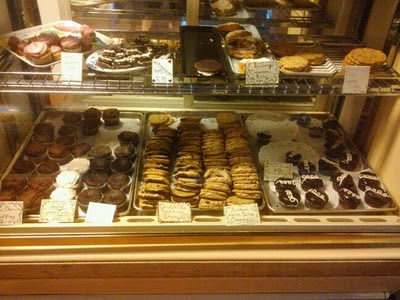 Yay smaller town vegans and having a awesome bday!
Posted by Kendy P at 1:02 PM No comments: