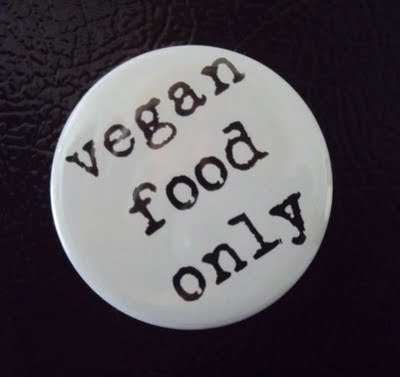 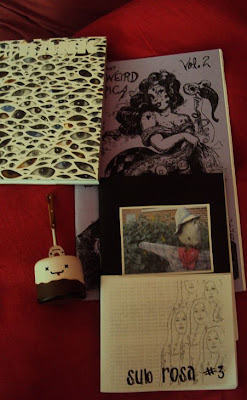 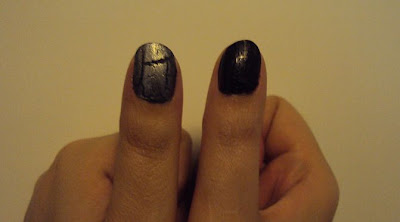 Kala over at Vegancraftastic and I arranged to do a June swap. She sent her package to me a few days ago and I received it yesterday. I got lots of awesome goodies! Here are some pictures. Sorry about the low lighting in the living room - it was 100+ degrees outside - no way was I going out to burn!

I have the vegan rib cage print in pink framed in my office, I am actually going to put this one in the kitchen! Chocolate coins - I am saving one to leave at the cemetery for my sister - she loved these! Green goddess seasoning, soda pop candy, purse sized nutty chocolate spread - yes! Also look at the awesome buttons I will be rockin' from her Etsy shop!

Primal Strip - my boyfriend asked if we could pick up some of these when we are in Sacramento this week - he was like 'mmmmMMMMmmmm', tea biscuits - yummy on their own - but spread a bit of Speculoos spread on them and you just take them to a new level! Tea, spices and more yummy spread round it all out in this photo!

Paper Source paper craft stuff: awesome because I am learning how to lino block carve and really want some cool papers to try out! Strawberry stuff for my collection: new purse pen and a wee lil spatula!!!

Thank you Kala - you rocked my day! I hope when you get back from your vacation my box brings a smile on your face!
Posted by Kendy P at 10:13 AM No comments:

The Clouds Have Eyes 8 - Bit Concert and Art Show [pt1]

Last Saturday my boyfriend organized the first ever 8 bit art show and concert in our town (and the surrounding towns for the record). It was a super rad show full of old friends and new friends and I am so very proud him of him for doing this!

Here are the visual artist's work that was displayed and sold all night long.

LoserKid5150's Lego sculptures. If you do not know by now this is my boyfriend's work. He started this crazy 8-bit Lego madness - now people on Etsy try to replicate his work...Suckers! Some of his bigger pieces made it to a new home that night! Awesome - man up!

Cinder Arts drove down from Sacramento to show off his work with his family in tow! Not only is he crafty but he recycles - using paper products to create his paper crafts! He really knows his stuff - he schooled me on paint and techniques!

This is my stuff. I play with perler beads on occasion (more so now that I have gotten positive feed back) and my boyfriend asked me to come up with some stuff. I sold a lot that night and had custom orders come in that I am working on. Perler beads really relax me!

Book of Awesome and Awesome Stuff! 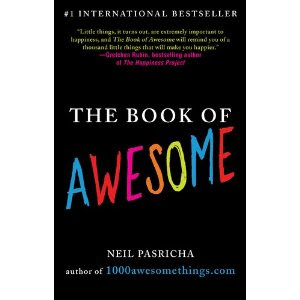 The last few days I have been reading The Book of Awesome by Neil Pasricha. It is a fun read that makes you smile! The book got me thinkin' about those little life moments that make you smile and think 'awesome'...Here are a few of mine.

What do you find awesome in day to day activities?
Posted by Kendy P at 10:35 AM 1 comment:

I am always on the look out for vegan snacks. I will pick up anything and give it a try if it is vegan! 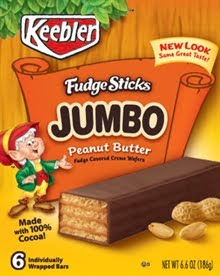 Right now these Keebler peanut butter sticks are a hit around here. Not the healthiest thing - but one at night with a cup of tea or decaf hits the spot! Matt was like "wow - who makes these?" and studied the box for future purchases! They have that comforting quality of the lunch box snacks you grew up with. 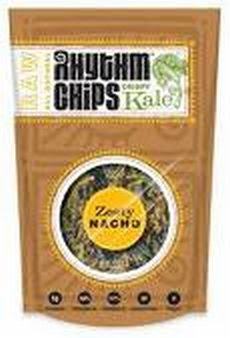 On to something a bit more healthy - but seriously addicting, Rhythm's zesty nacho flavored kale chips. Not really a traditional crispy chip - more like soft chip crumbs - these are odd but you have to have more. There is a mild kick to it but it has a cheezey like taste. I would like to try other flavors but this was all I could find at the store down the street!

Have you discovered any new snacks that you can't get enough of lately?
Posted by Kendy P at 10:43 AM 2 comments:

I woke up yesterday morning to find that Mar was featured on Catsparella and Vegan Flower reviewed my zine! All the nice words really made Mar and I happy! So thank you from both of us! We feel like stars!

Yesterday Matt and I went up to Harvest Home Animal Sanctuary to drop off blankets that we collected and some food. We got to spend time with animals and I even got to feed my homie Harold the Guinea Pig some organic greens I brought for him.

I wanted to take him home! Super fluffy friend! There were so many cool birds! Recent chicks that made it to the home included two rescues that were companions to a fire fighter that died battling a fire last week in the bay area. The story is sad but I know he would be happy to see his kids in a safe place.

This turkey dude is so cool! I love how he just follows you around!

I hope to spend more time with the animals at this special place. My newest project is making sweaters for the hens! I will post my progress in the upcoming weeks!
Posted by Kendy P at 8:52 AM 4 comments: 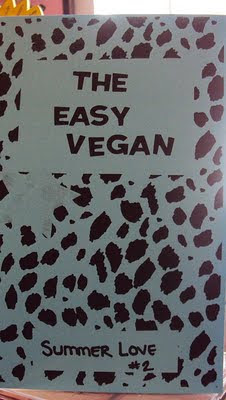 The second issue of my zine The Easy Vegan is out and can be found in my Etsy store! This time around the zine focuses on all things summer: BBQs, DIY insect repellent, ice cold delights...I hope you pick up a copy and enjoy it.
I already have plans for issue three due out in a few months. I want to focus on being a vibrant vegan. Lifestyle tips to keep you happy, yoga to make the stress go away, food that promotes a glow...You get the idea. If you have any ideas or want to write a article or submit a recipe - please do. You get a free copy!

Zines I am into right now and where to get them:

All I want Is Everything can be bought at ClickClackDistro. It is a great per-zine. I liked the bit about reminiscing about the 90s. I am feeling the 90s right now, big time Hole and Nirvana yearnings!
Nontoxic House Cleaning can be bought at Microcosm Publishing. It is a small zine but packed with useful tips and recipes that will spruce up your space!
The Juniper - for info you can check out Dan's blog. The issues of this zine have lots of great gardening tips. It makes me want to garden for real, not my half hearted attempts in the past.

Do you have any favorite zines right now? Let me know what they are!
Posted by Kendy P at 12:10 PM 1 comment: 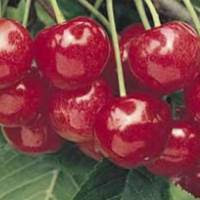 I am not saying that if you take chasteberry this will happen to you. I am just saying be careful, things do not always effect us the same! My hormonal acne is gone, my mood is better and my eyes are feeling better and that is what matters!
Posted by Kendy P at 10:29 AM 1 comment: