Last week we got a order in from Vegan Essentials of some much needed and not so needed products. I tried to get some things that seemed interesting and a few things that looked good. Here are a few hits and misses including what Matt thought.

We love queso around here, we just plop it over tortilla chips and call it a day. I was curious to see what a jar version tastes like. Nacho Mom's Ultimate Vegan Queso called out to me - who can resist cheezy flavor in a jar! I found it tasty, it had a slight kick and it is super healthy. For the price I am happy making my own though!
Matt says: Not high on the cheese factor, thick though and overall good. 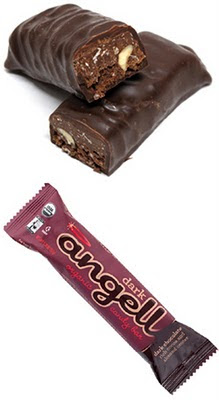 Dark Angell Organic Candy Bar has a nice chocolaty taste and I love the addition of the nuts, it reminds me of a old school in your lunchbox Kudos bar!
Matt says: The candy bar was good, but not the best I've ever eaten. It had a nice chewy chocolate bite. 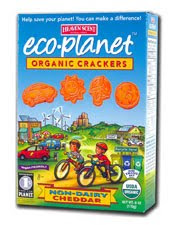 Cheese Crackers by Eco Planet are so tasty. The reminded me or cheesy crackers, a cross between the fish shaped ones and the ones that ended with it!I opened the box when we had company and we munched away happily. I am just a bit disappointed that a third of the box was crumbs.
Matt says: The cheese crackers have a great after taste. At first it tastes bland but then it the "cheese" kicks in and it's good.

The only disappointment with the products we tried was the gumballs by Dylan and Delaney . We tried the sour apple flavor wich was not really flavorful. The big complaint though was the texture of the gum. It was just mush and never really formed into something you could chew, so after a minute we spit it out.
Matt says: The gum balls were gross, they had absolutely no taste and they were not chewy.
Posted by Kendy P at 7:24 PM