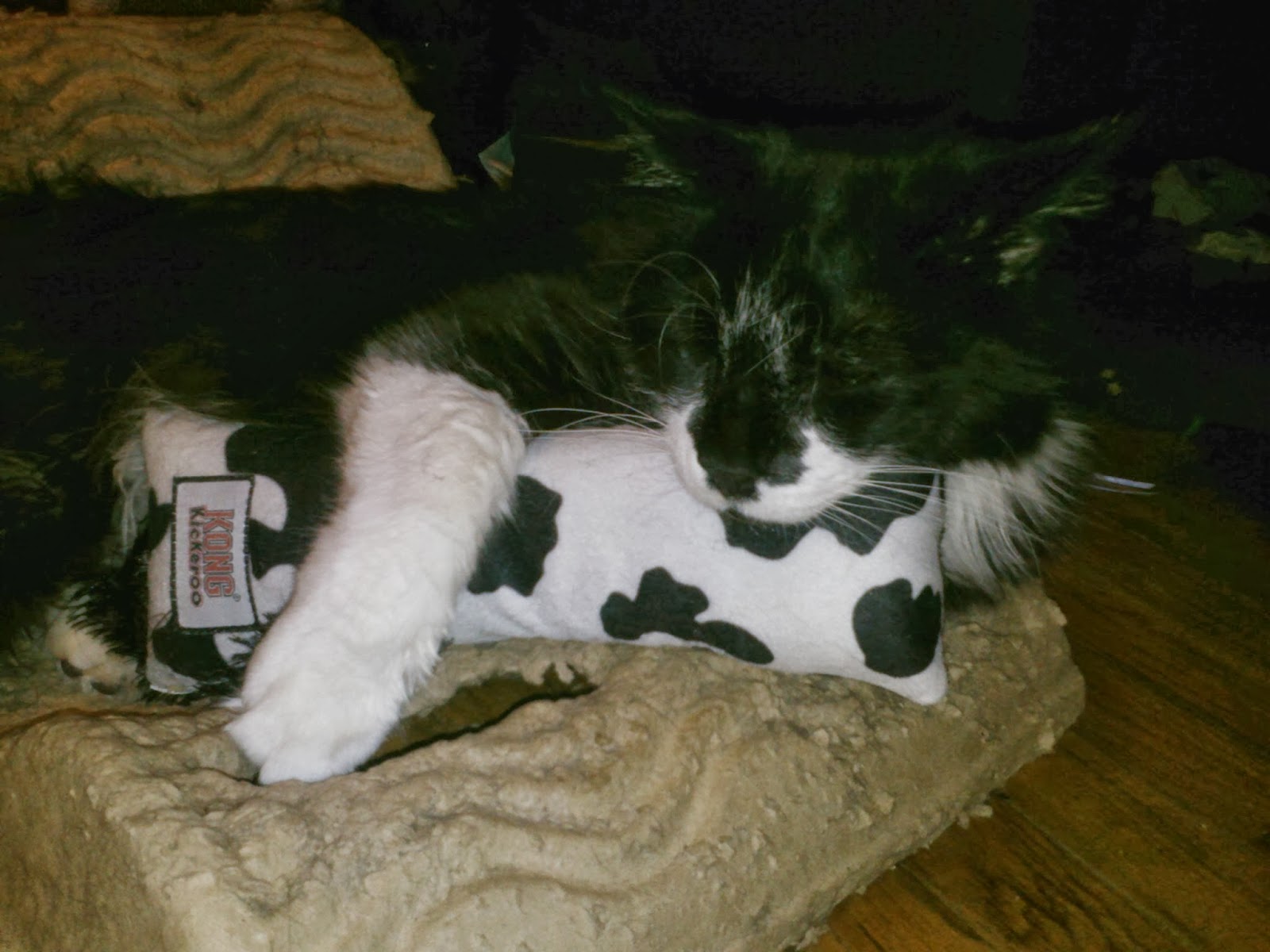 I would always joke that Mar was a cat version of Mario (Meowrio) Batali. Mar loved Italian food, from pasta to pizza – he would go crazy for it. One of his favorite things to eat was Daiya cheeze. Every Wednesday when I made a batch of vegan stove top macaroni and cheeze he would get excited. When he smelled anything he liked he would wait near Matt’s office door meowing to be let in since I bring food into Matt’s room so he can unwind after work on the computer.
Once I pre made a pasta bake and Mar smelled the noodles baking and ran to Matt’s door, not realizing daddy would not be home in hours. He was pretty bummed out.
Pizza – it had to be Daiya cheeze a bit of sauce and crust for him to be happy. Occasionally he would eat the Trader Joe’s brand but the Daiya made him purr the most.
Mar was not really one for sweets, he occasionally nibbled a baked good like a muffin but when it came to doughnuts – well you better be prepared to share and by share I mean he demanded most of your doughnut. His fave was the vanilla glazed vegan doughnuts from Whole Foods.
We discovered Mar’s doughnut addiction one night early in Matt and mines relationship. Matt’s mom sent home a doughnut, Matt put it on the coffee table of the apartment, we went to go get into our comfy clothes, came back to find Mar with the bag on the ground and ripped open, eating away furiously on his catch!
That was not the first time Mar “hunted” the second apartment we lived in was on the first floor. One night Mar ran out as I took out the trash. I called him for an hour, searching for him. When I got back, I found he pawed open the screen door and had someone’s foil wrapped ribs on the ground. I had to pull him off the food…
Within the first few months of living in our new house Mar was playing in the backyard. I went to get something to drink, came back and found Mar hunched over something. I was worried it was a bird, I screamed for Matt to get it away. Turns out it was a hot dog, I do not know where he found it but he was pretty pissed when we took it away from him.
Mar was not all meat and vegan cheeze. He loved avocados – I would make a smashed up piece of avocado for him calling it guaca-mary. He also had a crazy love for sweet potatoes. He loved sweet potato baby food, fries and baked with a bit of coconut oil! I would sometimes bake him little sweet potato bites for a snack.

Some of these food memories are my most favorite of Mar. I love sharing them and making people laugh. Enjoy the recipe for pasta bake below.

1 jar of MARinara sauce
1 package of penne pasta (you can omit about a handful – if your pasta overflows the pan!)
1 package of vegan Mozzarella cheeze
olive oil for baking dish

Preheat oven to 350. Cook your pasta according to package instructions. Drain. In same pot, mix pasta, pasta sauce and cheeze together. Dump into a oiled 8X8 baking dish. Cover with foil. Bake for 20 minutes, uncover bake for 5 more minutes then turn on the broiler and broil for a few minutes to get cheeze gooey! Take the pan out of the oven and let it sit for a few minutes.
If your broiler is still on why not make a loaf of garlic bread while your pasta sets? You have a winning meal there!
Posted by Kendy P at 9:35 AM