Some yummy treats were had in Berkeley last weekend besides the cupcakes from the RPSC event. 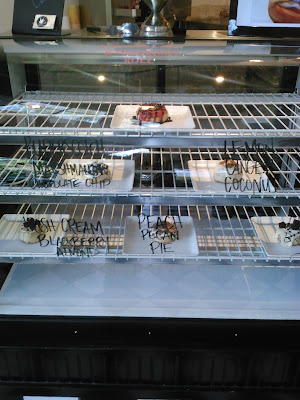 We finally made it to Cinnaholic before meeting up with friends at Saturn Cafe to score a cinnamon roll. We just went for fast and picked a already made brownie chunk combo. The treat was made within ten minutes and was perfectly warm in my hands, I wanted to dig in right then but was saving the treat till we were on our way home later in the night.
The cinnamon roll was super good even after sitting in the car for a few hours. My favorite part was the frosting - I can see why people do frosting shots of this stuff! Next time I am going to get seperate rolls for Matt and I - that way I can go crazy with flavors and he can play it safe! 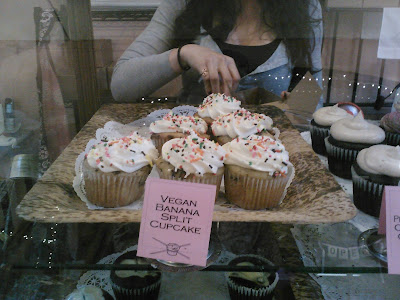 After dinner we decided to go grab a cup of coffee, as we rounded the corner everyone stopped at Cakes and Purls window, Matt was like "they have vegan stuff"...I ran in, plunked down $3 for a vegan banana cream cupcake and took a card to go. The shop was cute, the owner/person behind the counter was nice and it had me thinking I really need to get out my knitting needles!
The cupcake got a lil squished by the next day, but it was still tasty. I liked the cake part, Mar did too. Nice real banana flavor and moist. I am not a frosting person (unless it is like a cinnamon roll drizzle or something cream cheeze based) so my "meh" on the frosting is not important, but Matt said it was good.