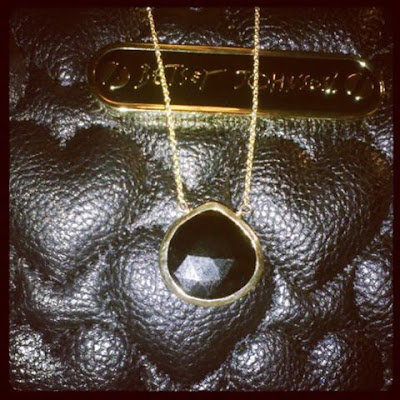 I have been on a real gold kick lately. It started with me buying a pair of Versace sunglasses that have gold accents. So now I mix silver and gold together and think nothing of it. I even try to grab gold more and mix it into my wardrobe-accessory-stash.

For our anniversary Matt did a little wishlist shopping for me after we agreed on not getting each other anything (besides cards and a 6 pack of beer I bought him)! Matt picked out a black onyx necklace from Delezhen that I had on my wish list. After handing it to me and me telling him that he broke the rules I opened it up all giddy like. I was so happy but then I noticed a pearl on the clasp and said that I did not know it contained non-vegan animal/sea life bits. I was sad, that I did not know it contained a pearl, so he contacted the shop owner and she said she can me a vegan version. We sent it back and in a week I had my new necklace! I have worn it a few times since I have gotten it - I really like the simplicity of it. Even though it is a simple design it is really eye catching and striking!