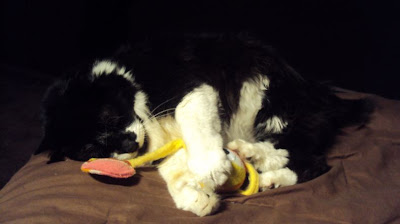 Mar's fave new cat toy comes from On A Whimm - a dear friend sent it to him. He loves playing with the tail and making it crinkle!

A few weeks ago we switched litters from an old standby that just was not working any longer to the clumping variety of Feline Pine. The second day he was using it it was being tracked everywhere - even on the bed and the pillows. Then I noticed I started having breathing problems and Mar started to dry heave - like he was coughing up hairballs but just pools of saliva. Also I went to cuddle with Mar - I did not know he just got out of the litter box but as soon as I sat him down I broke out in a horrible rash and my nose was dripping - I could not breathe.
We dumped the litter and are now using Word's Best Cat Litter - which has not tracked and has not made anyone sick! As soon as the other litter was out of the house my chest fog cleared up!
Posted by Kendy P at 1:39 PM