I have stated in the past that Matt and I both grew up eating taco truck and taqueria tacos-food. Living in Northern California - especially the valley taco trucks are a staple. So when we think of Mexican food the idea usually comes back to simple tacos made with fresh ingredients served with limes. Do not get me wrong - I can chow down on some fancy or tricked out Mexican food but I am pretty harsh. Matt is too! 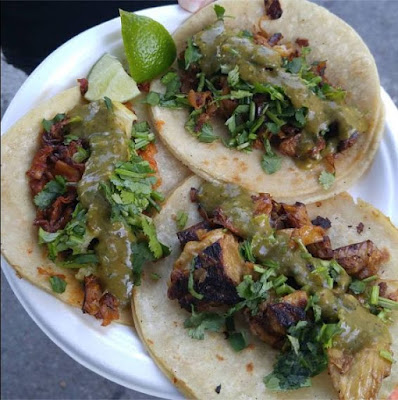 Matt ordered tacos, I was in a bad mood and was like 'I am not going to eat'. Matt went on and on about how good the tacos were and after leaving we went back and he bought me a plate. I took a photo too but mine was not as pretty as Matt's. Matt even picked up a bonus taco.

So this little stand is on the Harrison usually on either corner of 15th street. Everything is vegan. The menus and locations change so follow them via Facebook.  An hour in and food started selling out. So we went with tacos: carne asada, el pastor and carnitas. 3 tacos for $9 - decent price (especially by bay area vegan standards). Matt picked the asada as his fave, mine the carnitas. All the tacos were really good though. The grill taste was perfect and they were not greedy with the limes. It was legit taco truck food. We already want to go back. We hope this place grows, maybe get a truck or a small location and next time we want a torta!


*Tip: we realized afterwards there was a liqueur store across the street. We could have popped in for a Tecate or Mexican Coke - again next time.