Last week was just a blur of events that just lead us to filming for Matt's project in Oakland. It involved a lot of last minute prep and a long rainy cold day in Oakland. 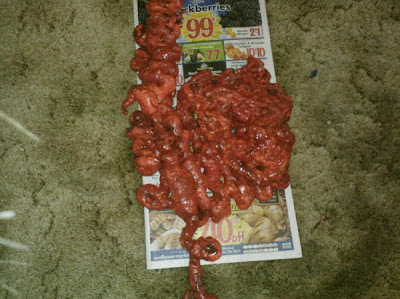 I got to make guts for the movie! Matt did the shaping of the guts and I painted them. The pile of guts (2 blobs and 2 entrails) cost about 75 cents each to make. They are on the fragile side but look so much better than the 'deli guts' you see in the meat packaging around Halloween. We went of a tutorial online - simplified a few steps and it was fun. I will make a tutorial soon if Matt does not blog about it!

The day before the Oakland shoot we got to watch The Hunger Games - we chose an odd time and the theater was not so busy! I think the movie was good - I enjoyed it. Sure I had a few mini gripes - not enough violence (I am not a "gore whore" but the brutality of the games was missing)...and the part in the book that made me cry was missing (hint: a special parachute delivery for Katniss)...If you are a fan of the book you will dig the movie!

On Saturday in Oakland I was freezing cold during the shoot - it was nonstop rain! We had Hella Vegan Eats cater the set - the food was picked through by the time we got to the line so no pictures. The best thing in our opinion was the ceviche - with mushrooms - we do not even like mushrooms but it was so good!

Next Saturday is another shoot day and after that hopefully things will get back to normal!
Posted by Kendy P at 12:21 PM