I was inspired by a Dean boy to beer batter something...Well, I modified the recipe, no fish (duh), extra seasoning and I made the meal a taco meal! Beer battered tacos with Sriracha slaw (Matt is warming up to the slaw!)... 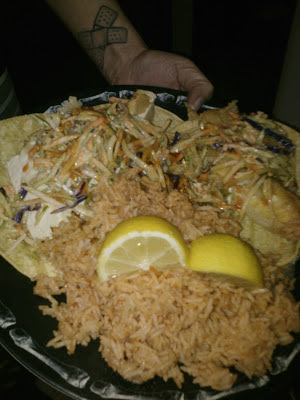 I wish the beer batter stuck a bit more, but it was really tasty, fluffy and puffy batter! So puffy that some of my tofu looked like Twinkies at one point! Served with red rice and fresh off the tree lemons!
By now you know I watch a lot of cooking shows. I always get inspired by non-vegan food to recreate it and make it vegan and easy. Moco Loco was one such dish that screamed to be made vegan. 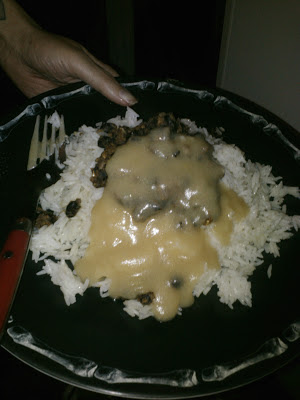 I made these black bean burgers with a slight spice modification, served it over organic basmati with a packet of vegan golden gravy mix...If I had planned a week or so in advanced I would have maybe bought and added a Vegg Egg on top to make it a true Hawaiian classic...Matt called  this meal interesting, I thought it was good and was way easy to put together after the gym!